In his talk at the 'Storytelling and the Voice' symposium (see previous post) Prof Mike Wilson explored Walter Benjamin's distinction between 'reading' and 'copying', from his 1928 essay 'Einbahnstrasse' ('One-Way Street').  This idea generated a lot of discussion.

Reading, according to Benjamin, is like soaring over a landscape in an aeroplane - you might miss an awful lot of detail, as well as what it actually feels like to be in that landscape.  Copying - say a notable quote or a poem - is like walking along the paths of that landscape on foot - feeling its scale and texture, noticing everything.  I do a lot of copying out of texts myself for the same reason.

Mike suggested, and we discussed, the similarity between this 'copying' form of close experiential reading and the retelling of a story - which involves re-walking the whole path of the story.  You feel the story a different way in retelling than in listening to someone else tell it - you are listening to it in a more dynamic way - because you both know and don't know what's coming next.  And as most storytelling is retelling, most storytelling is therefore, also, close reading.  Of course, in this form of reading is a personal transformation of the meanings in the story - or maybe better put, the reteller adds their own layer to the story and passes it on in this new form.  This is how all stories passed from one person to another (whether orally, digitally or in writing) contain many voices, not just that of the current teller.

In workshops I lead with teenagers, I almost always follow my telling of a story with an 'assimilation' exercise which is very akin to this copying process.  This might be retelling the story in pairs, passing a ball or stone between you - or round the circle, if it's a small or confident group.  Or it might be drawing images, writing key words, in a free-association process, and then reassembling these into a group poster.  This poster might be a chronological retelling of the story, but more often it isn't.  Groups usually choose to group the images and words thematically.  This process is a sort of group negotiation of what characters, symbols, places and themes are most important in the story.  Here's one from a group of young teenagers with additional learning needs: 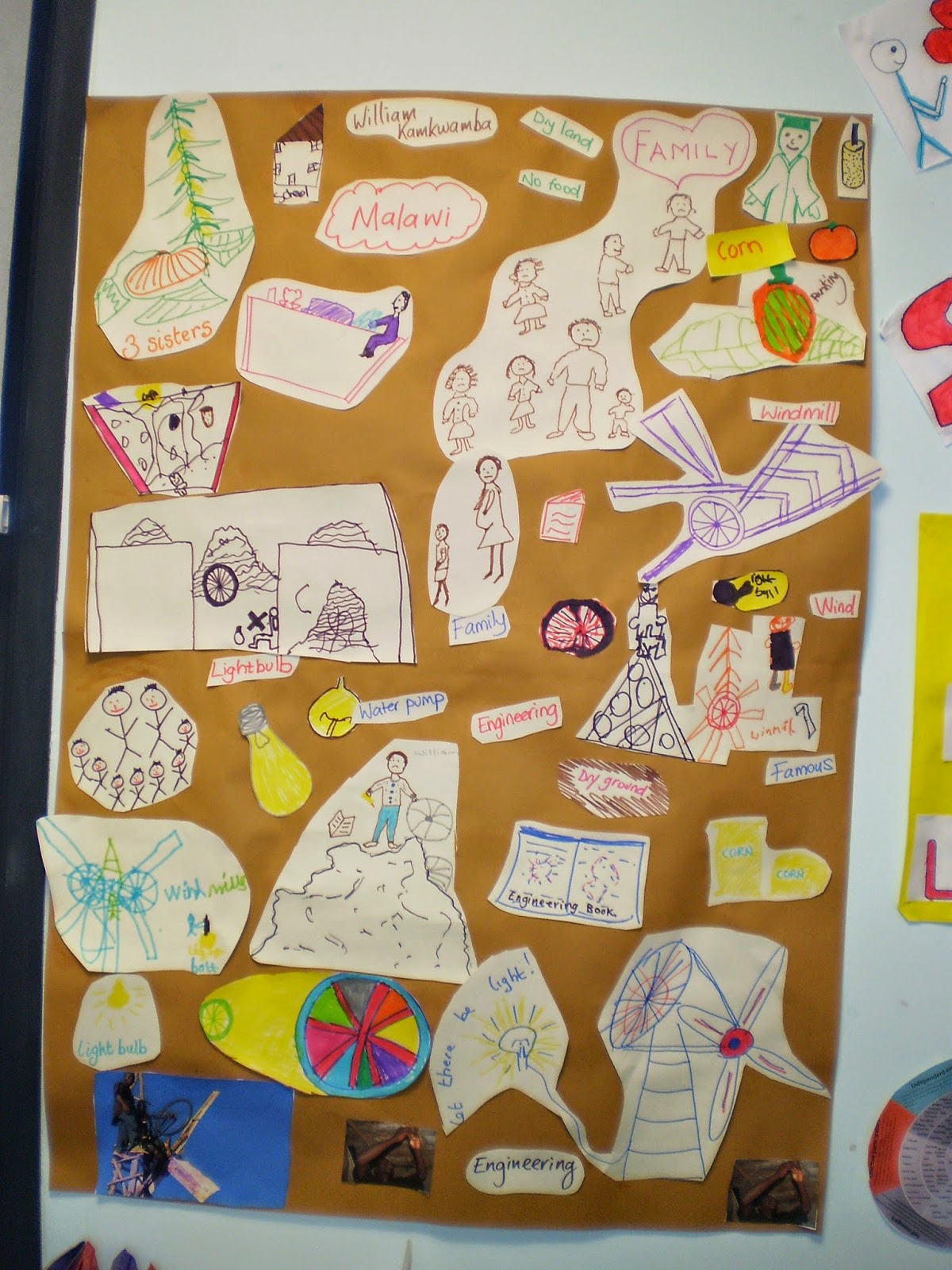 The story is the true one of William Kamkwamba, a 14-year-old Malawian boy who helped his village during a famine by using rubbish from the scrapheap, and his own engineering skills, to construct windmills for electric light, water pumps and mobile phone batteries.  The most important themes, for this group, appear to be William's large and hungry family, the rubbish tip and the windmill itself.  That is, William's problem, his resources, and his ultimate achievement.  Other groups might home in on something else - the bullying William experienced, his expulsion from school for not being able to pay the fees.

On finishing it, the group immediately wanted it to be put up on the classroom wall, and the teacher cleared another display there and then to accommodate it.  I will make use of it as a starting point when I return to work with this class soon.  Returning their story to them is the next round in the retelling game, and then we can layer other stories on top.

This poster is a group retelling, which is also a reshaping, of the story.  It is absolutely a form of literacy.  I started out this PhD feeling anxious about having to be seen to develop pupils' literacy through my work in secondary schools.  This anxiety is now much diminished - as I see (by walking the path, you might say!) how much pupils' sense of agency seems to be boosted from mastering a story by retelling it.  ﻿