Where are the arts in mental health strategies?

Yesterday I attended Higher York's conference on young people's mental health, 'Everybody's Business', showing an extract of the performance 'Wormwood in the Garden' I developed with Imogen Godwin and other young people in a mental health setting).

There is clearly high awareness at every level of the need for really concerted action on mental health in children and young people.  Action that recognises that, for whatever reasons (we may suspect them but cannot prove them), we have a bit of an epidemic on our hands.  And for a different, more ecosystemic model of working in which young people don't need to jump over thresholds to 'qualify' for treatment, where all the adults working with them do feel qualified to engage with and support their wellbeing without fear.  The recent policy 'Future in Mind' is inspiring stuff in many ways.  And just seeing the full room of intensely engaged individuals coming together from such a variety of professions and institutions was equally heartening.

What still concerns me is that what is being called 'mental health' may be part of an agenda of shifting responsibility for concrete, economic, social societal issues onto individual young minds. However supportive we may learn to be of them, are we empowering (naff word but very apt here, no apologies) them to define these causes and help reshape the society we are growing up in?  If, for example, as one speaker said, the majority of Year 10 and sixth form girls are experiencing mental distress of some kind, can we not go further than lamenting the cuts to further education budgets and the increasingly competitive, individualistic employment market?  Not to mention the media-engendered body fascism, the constant requirement to perform an acceptable identity in the virtual sphere, the growing inequality gap, the precarious zero-hours contracts, the doom-laden inevitability of austerity and climate change? Don't young people need to rage, as well as conscientiously work to improve their mental wellbeing along with everything else we ask of them?

I will keep saying it til I am blue in the face, but young people need the arts.  They need them so as they have the widest possible spectrum of languages to find their own understandings of these things and decide just what needs to change.  Of course storytelling can provide this language for some.  So can theatre.  So can other artforms.  I could not find one single mention of the arts in 'Future in Mind'.  Yet eight different people, representing eight different organisations/teams, approached me after our session asking how they could get training in using storytelling and the arts in their work.  All seemed to be saying that talking 'about' young people's mental health problems with them was not enough.  Other languages are needed.  We need the big stories of our culture to help us understand where it's going and open up real dialogue.

Whose story is it?

For me as a storyteller, as for most drama practitioners I meet and read, stories are like oxygen - they are essential, help to make up the very fabric of the world, belong in some sense to everybody, can be used for all sorts of things and combined with all sorts of things.  We understand the respect we owe to their tellers, but feel entitled to be inspired by their stories and reshape them.  We inhabit their 'gaps' with our own perspectives.

But is this fluid relationship with stories actually something that most young people are ready to take on?  We might assume that everyone is postmodern these days, everyone understands that 'reality' is a complicated concept.  Yet, on several occasions recently I have worked with groups of young people whose anxiety about using the stories of others to make a piece of performance has surprised me.

In a reflective dialogue with one talented young storyteller I worked with, I asked her, 'What strikes you about storytelling, as an artform?  What potential do you see in it for yourself?'  Her reply made me realise that our methodology had been new to her: 'I like how you can take something you like and mix it up with other things that go to make the story change.  Before I thought that that was called plagiarism!'  She had been able to accept it easily because our 'source' story was an old folktale, everyone's and no-one's, and the experience she was mixing it with was largely her own.

In contrast, a youth theatre group tasked with devising a piece of theatre in response to the current refugee crisis was full of apprehension.  They felt that interviewing refugees, as well as people who had worked to support them, would give them a too-weighty responsibility for honouring painful and traumatic stories.  The lead practitioner and I explained that we would not be 'taking' those people's stories or 'twisting' them - rather we would learn from them with both our minds, hearts and bodies, use them to build an understanding of the refugee experience. We would use a myth (Dido and Aeneas, the refugee story par excellence, as in Nathaniel Dance-Holland's painting here) as our starting point, and infuse it with elements of our research into the modern-day refugee crisis. 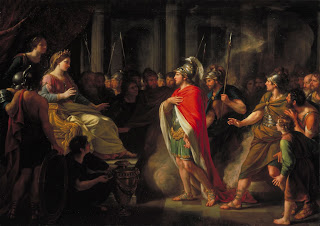 It was not easy for the young people to understand what we meant by this, or who was giving us permission to play so fast and loose.  It turns out that other practitioners have had similar experiences. Helen Nicholson, in her excellent book 'Applied Drama - The gift of theatre', discusses an intergenerational oral history theatre project she led in which young people portrayed the experiences of elderly neighbours:
'Because I had not introduced the students to the idea that memories are continually revised in the retelling, they were concerned to tell the stories as ‘authentically’ and ‘faithfully’ as they could.  However, I found this desire to reproduce events rather than represent them troubling…Their reluctance to experiment theatrically meant that their drama was limited by the confines of a form which, whilst it suited a rather simplistic retelling of events, did not really capture the ambiguity or emotions of memory.’ (2005, p.89)
In other words, as I often used to marvel in the first storytelling work I did with adolescents, the question 'is it a true story?' still often demands a literal answer.

Are there simple developmental factors at play here? Is it related to what David Elkind (1967) called adolescents' 'personal fable' - their belief in the uniqueness and incommunicability of their own strong emotions - and thus by extension, any one else' story or experience? Do you simply need to live for a certain length of time to develop an understanding that, while experience is not universal, all our stories draw on everyone else's stories?

Or is there also a generational factor at work?  I chatted this over with a friend who works and researches likewise with young people and in mental health. We suspected that the requirement to maintain a sophisticated performance of one's self on social media may make young people burningly aware of the value of retaining ownership of their own stories.  Danah Boyd (2014) charts the minefield this can pose and the considerable skills required to negotiate it.  For young carers I once worked with, their stories were a form of 'capital' they curated and built upon, both politically (to improve the lot of young carers) and personally (to obtain work experience, respect and contacts).

One's story is one's life, perhaps, to a greater extent than in previous generations.  I am reminded of the Plains Indians' practice of burying their hair and nail clippings, so no-one could steal their soul.  It all presents an interesting challenge to a storytelling practice based on playing within storyworlds and celebrating the multiple possibilities they contain.  That is our understanding, from a position of relative comfort.  We certainly need to understand and respect young people's chariness of being too cavalier with The Truth.